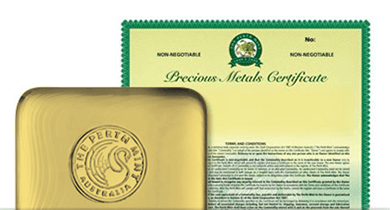 Please download the Perth Mint Certificate Application Form below, complete it and return it to us (scan or photo will suffice) by email or post.

What Are Perth Mint Certificates?

Perth Mint Certificates are one of the safest and most cost-effective methods of investing in gold, silver and platinum.

The Perth Mint is the trading name of Gold Corporation. It is the successor organization of the Royal Mint’s Perth branch that was founded in 1899. The certificate program is fully guaranteed by the Government of Western Australia. The government has received a very high AA+ rating from international rating agencies. PMCP is the only government-guaranteed certificate program in the world.

How Much Do Gold Certificates Cost?

The cost of Unallocated Gold Certificates is based on three factors:

For Allocated Certificates, clients will have a fourth pricing element, the fabrication fee.

Most clients interested in Perth Mint Certificates do not opt for allocated products due to the relatively high cost of storage, instead, they prefer unallocated certificates, which have no fabrication charges and no storage charges.

How to Buy Perth Mint Certificates?

Open an account, upload your identity documents, and application form and when your application is approved you can buy online.

When you buy unallocated gold through the PMCP, The Perth Mint issues a Precious Metal Certificate in your name, detailing the specific number of ounces of gold that you own and that is stored on your behalf in the Mint. PMCP unallocated gold clients have legal title to the gold stored in their unallocated account. Every certificate has a unique certificate number and is akin to a certificate of ownership.

The quantity of gold purchased will depend on the price per ounce of the metal and the amount that you have decided to invest. Perth Mint Certificates are highly liquid and can be sold through GoldCore.

The unallocated gold is held as an asset on the balance sheet of the Mint, and the gold that has been sold to clients is recorded as a matching balance sheet liability. Therefore, the unallocated accounts are 100% backed by gold and the asset and liability are fully matched. Any credit or insolvency risk is highly unlikely given that The Perth Mint is owned by the Government of Western Australia.

In The Perth Mint Certificate Program, none of the bullion is leased or lent out to the market, short positions are not allowed, and The Perth Mint does not use financial derivatives on its gold. Perth Mint precious metals stored for clients are fully insured under its unique Government Guarantee.

The Perth Mint undertakes full quarterly inventory stocktakes using both internal and external auditors from major accounting firms in Australia. The audits are reviewed by the Auditor General of the State of Western Australia who is answerable to the State Parliament.

What is the History of The Perth Mint?

Australia experienced three main waves of gold rushes in the 1800s. The first two were in the Eastern goldfields of New South Wales and Victoria in the early 1850s and resulted in mass migrations of gold prospectors to Sydney and Melbourne, respectively, and the rapid growth and development of these cities.

The third series of gold rushes occurred in Western Australia towards the end of the 1800s, most significantly at Coolgardie in 1892, and Kalgoorie in 1893. Again, this led to large-scale migrations of miners to the region, and the growth and development of the coastal city of Perth. Coolgardie and Kalgoorie are situated between 550-600 km east of Perth.

During the 1800s, Australia had evolved as a series of colonies under British rule. Like the rest of the British Empire, the Australian colonies used gold sovereign and gold half-sovereigns as circulating currency. Initially, the gold found in New South Wales and Victoria was shipped back to The Royal Mint in London to be converted into sovereigns and then returned to Australia.

When it was realized that local mints would be more cost-effective, The Royal Mint proceeded to open its first branch mint in Sydney in 1855. A second branch mint followed in Melbourne in 1872.

Likewise, following the gold discoveries in Western Australia, The Royal Mint opened its third branch mint in Perth in 1899. Miners from the western goldfields would deposit their gold at The Perth Mint wherein it was minted into gold sovereigns. The sovereigns manufactured in Australia were not purely for domestic use and also circulated as currency through The British Empire as Britain was on a gold standard. Sovereigns produced by each of the three branch mints were differentiated by mint marks on the coins, S for Sydney, M for Melbourne and P for Perth.

In 1931, Britain abandoned “the gold standard”, and so the Australian Mints stopped making gold sovereigns. (The Sydney Mint had closed in 1926). Between 1899 and 1931, The Perth Mint created more than 106 million gold sovereigns and nearly 735,000 half-sovereigns. The Perth Mint then turned to make gold bullion bars and during WWII became involved in the production of Australian coins. Until 1984, the Mint manufactured much of Australia’s conventional coin currency. (The Melbourne mint had closed in 1972).

The Perth Mint stayed under Britain’s jurisdiction until July 1970, after which ownership transferred to the State Government of Western Australia. Then in 1987, the Mint’s parent company Gold Corporation was created by a by a State Act of Parliament.

The Mint was then empowered by the Commonwealth of Australia’s Department of the Treasury to mint and market gold, silver and platinum Australian legal tender coinage for the benefit of investors and collectors.

The Perth Mint is responsible for manufacturing and marketing most of Australia’s legal tender precious metal coins and is one of only a handful of world-renowned mints whose pure gold, silver and platinum legal tender coins are trusted without question. These coins include the world famous Australian Nugget gold coins, Australian Platinum Koala coins, and Australian Silver Kookaburra coins which are sought after by bullion investors worldwide. Overall, The Perth Mint currently produces over 30 minted gold and silver bars and coins in a range of weights and sizes.

The Mint and refinery also provide refining and other services to the gold industry and manufactures many coins related numismatic items for investors and coin collectors.

In 2003, The Perth Mint opened a state-of-the-art 8,400 square meter manufacturing facility in 2003, next door to its original limestone building. Together, these two buildings represent more than 100 years of minting excellence in Western Australia.

How to Store Gold with The Perth Mint Certificate Program?

When you purchase unallocated gold held at the Perth Mint there is no storage charge. You only pay the quoted metal value at the time of purchase. This means that the unallocated gold certificate program makes gold investing considerably cheaper than gold ETFs and most other forms of gold investments.

Since the Perth Mint is a working refinery and mint, it requires an operating inventory. Instead of borrowing cash or metal to finance this inventory, the Mint created a system of unallocated metal investment where clients with unallocated gold accounts get free metal storage and the Mint may use the customers’ investments to finance its inventory.

The Perth Mint is the only depository operating today that can offer U.S. investors a Government Guarantee of one of Australia’s wealthiest states.

The Perth Mint is wholly owned by the Government of Western Australia and has been providing investors with secure vault storage of precious metals along with trading facilities since 1899. Western Australia is rated AA+ by international credit rating agencies.

All PMCP metal is insured at The Perth Mint’s expense by London Insurance syndicates.

Can I Have Allocated Gold and Silver Bars and Coins With The Perth Mint Certificate Program?

Yes, you can. We offer a range of bars and coins to investors who wish to have the added comfort of allocated and segregated storage with a Government owned and controlled mint.

Can I Convert My BullionVault Gold Holdings to Perth Mint Certificates?

Yes, but you must sell your BullionVault holdings and then transfer your proceeds to your new Perth Mint Certificate Account via GoldCore. BullionVault offer an attractive precious metal trading solution in which clients can quickly buy and sell gold and silver online via a web trading platform. In our view, the system is fit for trading online especially when taking short-term positions. We believe though that for those clients who are seeking long-term storage of unallocated gold The Perth Mint Certificates Program may be a better option. GoldCore believe the PMCP is better for the following reasons:

We are also delighted to offer any clients wishing to transition from BullionVault to Perth Mint Certificates a very special offer.

This reduction coupled with the savings in annual storage charges makes this offer very attractive. This offer is for a limited time only, so please act now to avail of it.

Very well. There are many Gold backed Exchange Traded Funds or ETF’s in the market to choose from. They offer exposure to the gold price for very reasonable trading fees, fast execution, and low storage charges. Many investors have concerns over the structure of ETF’s and the level of access investors may have to their gold holdings in the event of a crisis. Some ETF’s are better than others. In our view, short-term trading is suited to ETF’s and digital bullion trading platforms such as GoldMoney and BullionVault. For long-term holdings and permanent positions, we believe that holding physical bars in storage in allocated and segregated form trumps all else. Some platforms allow clients to convert to physical bars, but at a cost.

The reason we believe this is simply down to counterparty risk and the legal proximity an investor will have to the underlying asset in times extremis. We believe that the legal trading structures needed for a provider to give direct market access to an investor have in themselves major systemic drawbacks that directly limit the options to take physical delivery.

Most digital gold platforms only offer, by default, pooled gold investment stakes where ownership is conferred by virtue of a specific measure of weight in a shared bar being attributed to an investor. This makes taking physical delivery impossible without going through a formatting process which can be very expensive, if even available as it is frequently not.

We believe that for long-term minded investors owning individual gold and silver coins and bars segregated from other investors coins and bars, not commingled and on a shelf gathering dust represents the very best and most secure form of precious metal ownership in the world.

What Are the Costs of Allocated Gold With Allocated Perth Mint Certificates?

When you store allocated metal you are choosing to fabricate a bar or coin of metal into a solid identifiable form and record the ownership that physical object in your name. The unit is then stored, guarded and insured and in the case of The Perth Mint, guaranteed by a sovereign state. To store gold in unallocated form the cost is 1.00% per annum. To store silver in allocated form the cost is 1.90%.  As such most clients choose unallocated storage instead of allocated when buying Perth Mint Certificates.

What Are The Costs of Storing Unallocated Gold With Perth Mint Certificates?

There is no cost and it is free. When you store allocated gold and silver bullion, you are choosing to own a specific weight of bullion that is stored with the mint directly. It does not have a specific form as it is part of the working inventory of metal used by Perth Mint in its operations. The metal is utilized, guarded and insured and in the case of The Perth Mint, guaranteed by a sovereign state.  When an investor buys and holds gold the largest component of cost is typically not the buy premium but the actual holding costs. With unallocated Perth Mint Certificates, there are no annual storage costs. So in our view, this makes them the lowest cost gold investment option in the world.